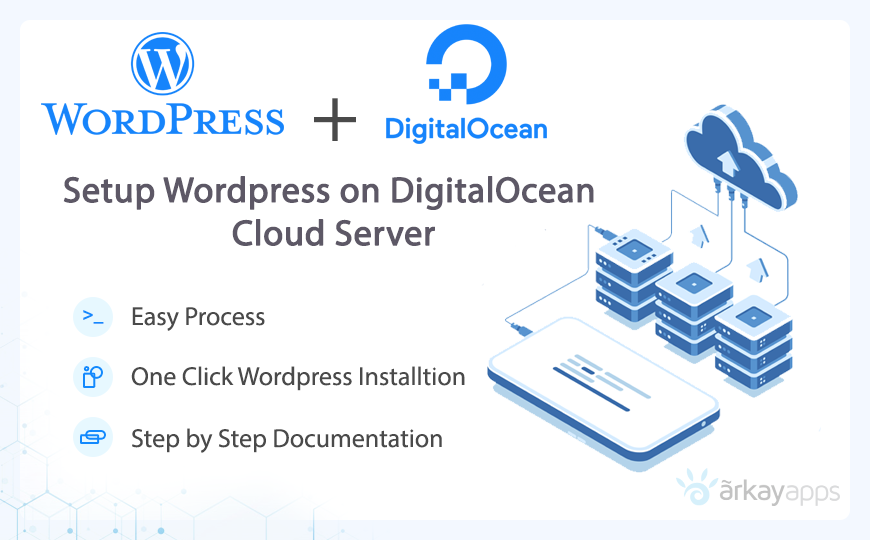 Digital Ocean is a fastest-growing developer-friendly cloud hosting solution companies focus on simplicity and scale. Today we are going to learn how to set up (Install) and configure WordPress on DigitalOcean Cloud Server Droplet.

Getting started, you need a domain name to use this One-Click, which you can purchase from any domain registrar You can purchase it from Google Domains, Godaddy, etc.

If you do not have DigitalOcean account you can create one and get $100 Free credit.

After that, you’ll need to log into the Droplet via SSH to finish the WordPress setup. This restricts the setup wizard from being visible to the internet until you’re ready to complete it. If you try to visit the Droplet’s IP address before logging into the Droplet, you’ll see a DigitalOcean landing page. 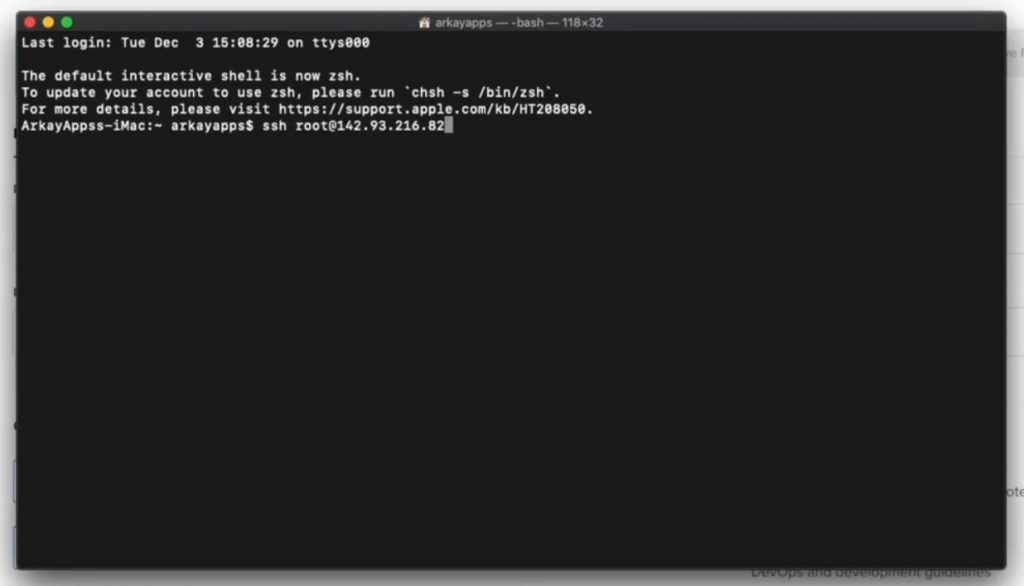 If you did not add an SSH key when you created the Droplet, you’ll first be prompted to reset your root password.

Then, the interactive script that runs will first prompt you for your domain or subdomain.

An A record from the domain (e.g., your-domain.com) to the server’s IP address.

An A record from the domain prefaced with www (e.g., www.your-domain.com) to the server’s IP address.

Next, the script will ask you to enter your domain.

Next, the script will ask you to create the administrative user for your new WordPress blog. These are the credentials you will later use to log into your new site from your browser.

The next step asks if you want to use SSL for your website via Let’s Encrypt, which we recommend.

If you like to redirect all your traffic then select 2 otherwise select 1.

After you respond to these prompts, you’ll see a confirmation message.

WordPress has been enabled at http://your-domain.com Please open this URL in a browser to complete the setup of your site.

At this point, you should visit the Droplet’s IP address in your browser to see your new site and visit http: //[your_domain]/wp-admin to manage it.

Once the installation is complete, you can use the WordPress admin dashboard to customize the new site.

In addition, We recommend you take a few customized setup steps:

when hosting multiple sites creating an Apache virtual host file for each site maintains the default configuration as the fallback, as intended, and makes it easier to manage changes.

If you didn’t enable HTTPS during the initial setup script, you can enable it manually at any time after the fact.

Setting up an SSL certificate set up HTTPS on the webserver, which secures the traffic between the server and the clients connecting to it. Certbot is a free and automated way to set up SSL certificates on a server. It’s a part of the WordPress One-Click to make securing the Droplet easier.

To use Certbot, you will need a registered domain and two DNS records:

Additionally, if you’re using a virtual hosts file, you’ll need to make sure the server name directive in the VirtualHost block (e.g., ServerName your-domain.com) is correctly set to the domain.

Once the DNS records and, optionally, the virtual hosts files are set up, you can generate the SSL certificate. Make sure to replace the domain in the command. Load Balancing manages workload between two or more computers(machines). The advantage of load balancing is that allows for more efficient use of computing resources and prevents anyone machine from being overload. This is very important for high traffic website.

In short, Load balancers manage traffic to groups of Droplets, which decouples the overall health of a backend service from the health of a single server to make sure that your services stay online. [1]

There are two steps for creating load balancing.

Step 1: Start by creating a load balancer using the Create button at the top of the control panel. 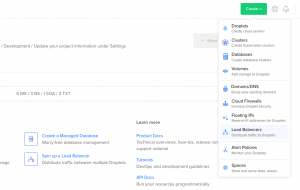 On the creation page, you will:

Step 2: Choose a datacenter region. Your load balancer and its backend Droplets need to be in the same datacenter, so choose the region where your Droplets are or will be located.

Step 3: Add forwarding rules. Forwarding rules define how traffic is routed from the load balancer to its backend Droplets. You need at least one rule.

Step 4: Finalize and create, which includes Choose a name and Select project. Load balancer names must be unique and contain alphanumeric characters, dashes, and periods only.

Video of Create LoadBalancer and setup up Droplet.

You can add individual Droplets or you can choose a tag. You can only choose Droplets that are in the same region as the load balancer.

Round Robin – Requests from clients are spread out across the group of servers sequentially.

Least Connections – A new request from the client is sent to the server with the fewest current connections to clients. [2]

So we can say that load balancer is a very useful utility for large scale projects for handling sudden hike of incoming requests. And digital ocean provide this useful utility in very few steps and in hassle less manner.

There have been various tools released for cross-platform development over the years, including web-based tools such as PhoneGap from Adobe, powerful frameworks such as Xamarin from Microsoft, and newer tools such as React Native from Facebook. Each toolset has pros and cons and they have met with varying degrees of success in the mobile industry.

Flutter from Google is a recent framework to enter the cross-platform arena, which was announced in February at Mobile World Congress 2018 to be entering a beta phase. Features of Flutter are fast development cycles, fast UI rendering and unique UI design, and native app performance on both platforms.

Dart programming language is used to write Flutter apps that are originally from Google and now an ECMA standard. Dart language is somewhat similar to languages like Kotlin and Swift and can be trans compiled into JavaScript code.

Flutter application development can be done on Windows, Linux, or macOS. While you can use any editor with the Flutter toolchain, there are IDE plugins for IntelliJ IDEA, Android Studio and Visual Studio Code that can ease the development cycle. We’ll use Android Studio for this tutorial.

Set up an editor

install the Flutter and Dart plugins

The main() function near the top uses the => operator for a single line function to run the app. You have a class for the app named GHFlutterApp.

You see here that your app itself is a StatelessWidget. almost every entities in a Flutter app are widgets, either stateless or stateful.  Override the widget build() method to create your app widget. You’re using the MaterialApp widget that provides a number of components needed for apps following Material Design.

For this getting started tutorial, remove the test file widget_test.dart in the test folder from the project by selecting it and hitting the Delete key.

If you’re on macOS, startup the iOS simulator. You can also use an Android emulator on macOS, Linux, or Windows.

The best aspect of Flutter development is being able to hot reload your app as you make changes. This is like Android Studio’s Instant Run.

Almost every element of your Flutter app is a widget. Widgets are immutable, since using immutable widgets helps keep the app UI lightweight.

There are two fundamental types of widgets you will use:

Stateless widgets are immutable, meaning that their properties can’t change—all values are final. [1]

Stateful widgets maintain state that might change during the lifetime of the widget. [1]

To get started with making your own widgets create a new class at the bottom of main.dart:

You have made a StatefulWidget subclass and you’re overriding the createState() method to create its state object. Now add a GHFlutterState class above GHFlutter:

Add a build() override to GHFlutterState:

Fill out build() as follows:

A Scaffold is a container for material design widgets. It acts as the root of a widget hierarchy. You’ve added an AppBar and a body to the scaffold, and each contains a Text widget.

Update GHFlutterApp class so that it uses your new GHFlutter widget as its home attribute, instead of building a scaffold of its own:

Earlier you imported your own strings.dart file into the project. You can similarly import other packages that are part of the Flutter framework and Dart.

For example, you’ll now use packages available in the framework to make an HTTP network call and also parse the resulting response JSON into Dart objects. Add two new imports at the top of main.dart:

Dart apps are single-threaded, but Dart provides support for running code on other threads as well as running asynchronous code that does not block the UI thread using an async/await pattern.

You’re going to make an asynchronous network call to retrieve a list of GitHub team members. Add an empty list as a property at the top of GHFlutterState, and also add a property to hold a text style:

The underscores at the beginning of the names make the members of the class private.

To make the asynchronous HTTP call, add a method _loadData() to GHFlutterState:

The underscores at the beginning of the names make the members of the class private.

To make the asynchronous HTTP call, add a method _loadData() to GHFlutterState:

You’ve added the async keyword onto _loadData() to tell Dart that it’s asynchronous, and also the await keyword on the http.get() call that is blocking. You’re using a dataUrl value that is set to the GitHub API endpoint that retrieves members for a GitHub organization.

When the HTTP call completes, you pass a callback to setState() that runs synchronously on the UI thread. In this case, you are decoding the JSON response and assigning it to the _members list.

Add an initState() override to GHFlutterState that calls _loadData() when the state is initialized:

Now that you have a Dart list of members, you need a way to display them in a list in the UI. Dart provides a ListView widget that will let you show the data in a list. ListView acts like a RecyclerView on Android and a UITableView on iOS, recycling views as the user scrolls through the list to achieve smooth scrolling performance.

You are returning a ListTile widget that shows the “login” value parsed from the JSON for the ith member, and also using the text style you created before.

Update the build method to have it’s body be a ListView.builder:

That’s just how easy it is to make a network call, parse the data, and show the results in a list!

To add dividers into the list, you’re going to double the item count, and then return a Divider widget when the position in the list is odd:

Be sure not to miss the * 2 on itemCount. You’ve removed padding from the builder now that you have dividers. In itemBuilder, you’re either returning a Divider(), or instead calculating a new index by integer division and using _buildRow() to build a row item.

Harsh Gor October 25, 2019 0 Comments
We use cookies to ensure that we give you the best experience on our website. By continuing to browse the site you are agreeing to our use of cookies. For more information read our Privacy policyI Understand